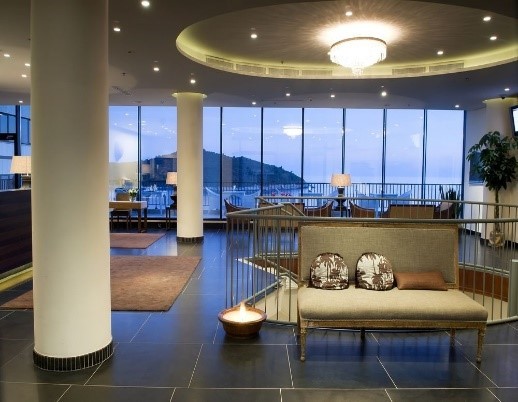 Hotel Excelsior is an iconic hotel in Dubrovnik. Its decoration, rich offer and location right by the sea make it one of the architectural landmarks of the city of Dubrovnik. The hotel consists of 3 individual but interconnected parts – Villa Odak, the new tower, and connecting part. A complete renovation of the hotel began in late 2016, an investment worth millions of dollars. The full-fledged renovation included all accommodation facilities and common areas such as the terrace, café, restaurant and kitchen. The renovation did not include conference rooms, swimming pools and wellness area.

The main contractor was the construction company STRABAG, while ECCOS was in charge of installing all electrical systems and installations, fire alarm systems and emergency lighting, as well as upgrading and modernizing all smart room installations and video surveillance and sound systems. The largest and most challenging task was the unrealistically short deadline set by the investor. The current hotel systems were so outdated and ineffective that a total upgrade was required before the beginning of the congress and tourist season, which was just a few months away. Since all the partition walls were demolished, there were no rooms, and after the new reconstruction it was necessary to put in completely new installations and build new systems practically from scratch, or upgrade existing ones.

What turned out to be the main obstacles were the extremely ineffective existing systems that, according to the design, needed to be upgraded, modernized and adapted to the growing needs of the hotel. The shortcomings of the design according to which Eccos was originally required to perform works were not the result of ignorance of the designers of the investor’s partner company, but of the lack of information. The design proved to be inadequate only after the beginning of the planned works. Eccos’ engineers and technicians realized that a high-quality upgrade wasn’t possible and they were not ready to apply temporary solutions that, in terms of safety and security, were not in line with the rules and standards. At an early stage of the project, they identified deficiencies that could not have been promptly and adequately corrected, therefore they proposed and developed new, effective and long-lasting solutions to satisfy all standards and enable the smooth operation of all systems. It is precisely in this phase of the project’s execution that Eccos’ engineering capacities came to the fore, and new designs demonstrated the thoroughness, comprehensiveness and flexibility of the proposed solutions. These unforeseen obstacles required extra effort and inevitably shortened the already constricted deadline. The fact that Eccos’ engineers and technicians, despite unrealistic deadlines and additional requirements, succeeded in completing all the works on time, and delivered quality and comprehensive solutions, speaks volumes about the knowledge, skills, commitment and organization of the Eccos team.

The intelligent lighting control system has been redesigned to enable the illumination of any point at a desired time and to a desired extent (e.g. dim lighting, high brightness, etc.) with a single click in the application. Brand new emergency lighting and fire alarm systems have been installed throughout the entire hotel and surrounding driveways, thus upgrading the evacuation plan to a very high level. Key points in the hotel have been supplied with new distribution cabinets as well. The existing smart room installations proved deficient due to outdated, defective and inadequate equipment. Eccos has managed to correct all the deficiencies and adapt all the equipment to new requirements and standards. Video surveillance and sound systems have been modernized in a similar way.

The adaptation of existing, and the development of new systems required several months of work performed by a dozen Eccos engineers and 30-50 technicians on a daily basis. Although the hotel itself is attractive, the logistics facilities are very limited – access roads are narrow, there is no space for office containers, and storage facilities and parking space for cargo vehicles are very limited. In ideal conditions, a venture of these scales would take about a year. Works at the hotel began in late 2016, and the completion was scheduled for mid-April 2017, when the first congress was planned, while the first guests were expected in early May.

Considering the extremely short deadline and extra time spent on presenting and designing new solutions, as well as on performing works and commissioning, Eccos’s engineers and technicians have demonstrated incredible strength, expertise and professionalism, and proved that investors can count on them even when faced with the most complicated projects and difficult conditions.